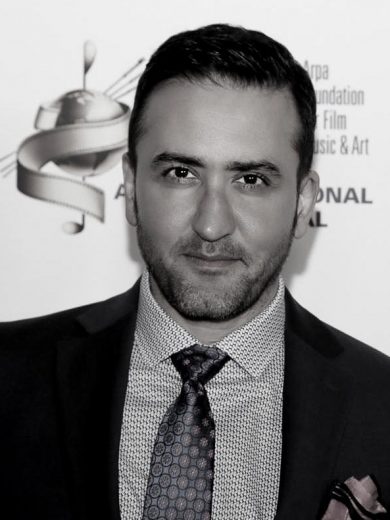 Born in Tehran, MARTY SADER began his career as a director with Most High, an award winning independent feature flm he created, co-wrote, directed, and starred in. In order to explore the affects of methamphetamine addiction on the human body and the human peyche, Marty combined a startling physical transformation (a body weight fluctuation of more than two hundred pounds) with riveting camerawork, and, most importantly, the flmmaking ingenuity to somehow make every penny of his micro-budget show on the screen. As a result, Marty's directorial debut Alm swept all the top prizes in every festival it entered, beating former Slamdance and Sundance Film Festival winners.

For his second feature, Monday Nights At Seven, Marty partnered with Academy Award nominated actor Edward James Olmos to examine the subject of love in a characteristically unvarnished way. Monday Nights At Seven is no fairy tale love story. It is gut-wrenching and honest, fraught with the complications of real love, warts and all. Monday Nights At Seven is slated for release in early 2020. During interim years, the Hamptons International Film Festival selected Marty to be followed by a documentary flm crew as he created, produced, shot and edited his gripping short Alm, 32, for the fest' 48-Hour Short Film Contest sponsored by Panavision and Volkswagen. Marty has also directed multiple short flms and documentaries, including behind-thescenes portraits of Olympic Gold Medalists and professional athletes.

No comments to show.